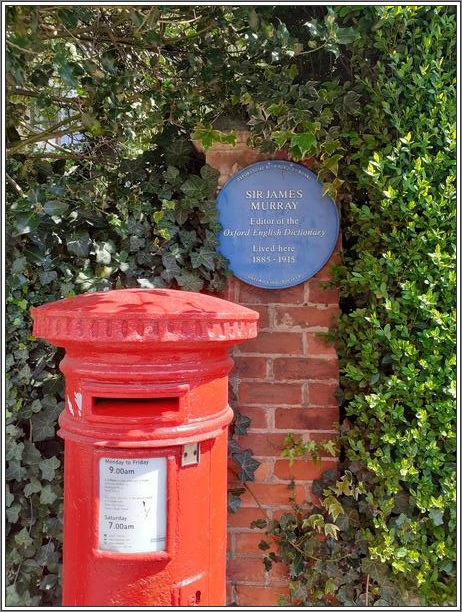 About the Murray Scriptorium

This pilot edition of the correspondence of James Augustus Henry Murray contains a small edited selection—88 letters in total—from the vast number of documents held in the Murray Papers of the Bodleian Library, in the Archives of Oxford University Press, and in several collections beyond Oxford, relating to the creation of the Oxford English Dictionary and to the professional and personal life of its principal editor. The Murray Scriptorium aims to publish open-access, fully edited copies of Murray’s correspondence (and where relevant his other papers) to enable researchers, educators, and readers beyond academia to explore the foundations of one of the most influential books in the English language.

What is the Oxford English Dictionary?

The OED is a record of the history of English from c. 1150 to the present day. It was conceived by the London Philological Society in 1857, and its first two successive editors were Herbert Coleridge and Frederick James Furnivall. However, it was not until Oxford University Press agreed to fund the project and a new editor—James Murray—was appointed in 1879 that the production of the dictionary began. Its first edition (OED1) was published in alphabetical instalments or ‘fascicles’ from 1884 to 1928; at the time, its official title was A New English Dictionary on Historical Principles. Though initially Murray was the sole editor at work, aided in house by a small team of assistants, over the years he was joined by three co-editors: Henry Bradley, William Alexander Craigie, and Charles Talbut Onions. Murray and Bradley died in post, leaving the dictionary’s completion to Craigie and Onions. The last two editors went on to issue a single-volume Supplement to the work in 1933; this was followed by a second, four-volume Supplement (1972–1986) edited by Robert William Burchfield. The Supplements were combined with the original dictionary, with minimal revisions, to produce a second edition (OED2) in 1989. The second edition was launched on the Web as OED Online in 2000, and since then the dictionary has been undergoing its first full revision for its third edition (OED3). For a detailed timeline, see ‘Dictionary Milestones’ on OED Online.

Who was Murray and what is a scriptorium?

James Murray was born in the village of Denholm in the Scottish Borders in 1837. Though he left school aged fourteen, he was an autodidact whose facility with languages led him to become a schoolteacher and an amateur philologist. After he moved to London in 1864, his work brought him to the attention of the Philological Society, which decided to appoint him the chief editor of the Society’s dictionary—a position he held from 1879 until his death in 1915. Scriptorium is the name Murray gave to the two workrooms in which he compiled the OED. The first Scriptorium was built at Mill Hill School, where he taught until giving himself to the dictionary full time in 1885. At that point, James Murray and his wife Ada Agnes Murray moved with their growing family (they would raise eleven children in all) to 78 Banbury Road, Oxford. A second Scriptorium was built in the back garden of their new home. Despite the jokingly grandiose name, both Scriptoriums were simple sheds made of corrugated iron. OED1 defined scriptorium as ‘A writing-room; spec. the room in a religious house set apart for the copying of manuscripts’. It seemed a fitting name for a project dedicated to digitizing Murray’s manuscripts.

Why do Murray’s letters (and their digitization) matter?

The OED was a large-scale, collaborative enterprise built on information supplied to its editors by a network of advisors, specialists, and volunteer readers, all of whom communicated with each other by letters. Extracts from Murray’s correspondence and other papers have been quoted in several histories of the OED (e.g. Murray 1977; Mugglestone 2000, 2005; Brewer 2007; Ogilvie 2013; Gilliver 2016), but the publication of full letters opens a number of new possibilities to the reader. The personalities of their writers appear in finer (and more varied) contour, and the trajectories of discussions, negotiations, and arguments can be traced in greater detail. But readers are not limited to exploring the history of the OED and its compilers in chronological order. Digitization allows other trails to be followed across letters that are linked by particular correspondents, their places of writing, topics of conversation, or individual words under consideration (see the search functions here).

The revolutionary feature of the OED was (and continues to be) its grounding in quotations showing the actual histories of words in use. Five million quotations in all were gathered for the first edition, the bulk of them by volunteer readers who in many cases exchanged letters back and forth with Murray over years, becoming fast friends and confidants in the process. In addition to these long series of correspondence, Murray wrote innumerable letters to other individuals in his search for information about words, whether relating to etymology, spelling and pronunciation, definition, range and dates of use, or anything else. The replies he received formed a further stream of evidence, some of which also went straight into the dictionary in the form of direct quotations or editorial notes. Crucially, the Murray Papers also contain many drafts and fair copies of letters written by Murray himself, which reveal his own understanding of the purpose and function of the dictionary and the principles and execution of his work.

The scope of Murray’s correspondence

Murray estimated that he received ‘from thirty to forty [letters] a day’ at the start of his editorship, dropping within three years to ‘about sixty a week’. These figures were reported by the writer and OED contributor Jennett Humphreys on a visit to Murray’s first Scriptorium at Mill Hill School in 1882. After the Murray family’s move to Oxford three years later, Murray still sent so many letters that the Post Office specially installed a pillar box outside their house on Banbury Road for his convenience. (The pillar box is still in service.) Before then, Humphreys could already describe seeing ‘huge quartos […] a hand thick’ of Murray’s correspondence to date, holding ‘so many letters they counted up to more than 5,000 as a whole’:

‘Further,’ says Dr. Murray, after giving these figures, and sharing in the surprise of them, ‘I shall continue to collect. These are all the letters up to this date, missing none, that I have received; all the post-cards; all the other communications. They come from readers, from sub-editors, from mere inquirers who ask and who are gone; they come from everybody. I keep them for reference; even for history. That the whole material on which the Dictionary shall be built shall be here for any after use that may be made of it, is an essential part of my scheme.’ (Humphreys 1882: 452.)

Decades later, in a lecture to the London Institution in 1910, Murray described his range of correspondents:

I write to the Director of the Royal Botanic Gardens at Kew about the first record of the name of an exotic plant; to a quay-side merchant at Newcastle about the keels on the Tyne; to a Jesuit father on a point of Roman Catholic Divinity; to the Secretary of the Astronomical Society about the primum mobile or the solar constant; to the India Office about a letter of the year 1620 containing the first mention of Punch; to a Wesleyan minister about the itineracy; to Lord Tennyson to ask where he got the word balm-cricket and what he meant by it […] In fact a lexicographer if he wants to be accurate, has to be a universal enquirer about everything under the Sun, and over it. (Gilliver 2016: 268.)

For more information on the nature and content of Murray’s correspondence as a whole, see Brewer and Turton (2021).

This pilot attempts to give a (necessarily partial) impression of the range of Murray’s correspondence and the variety of areas it tackled, a list of which can be found under Subjects. But its selection has also been made with an eye to illustrating in greater detail certain topics of research and discussion in the archive that are of special interest today, namely the dictionary editors’ treatment of

is a topic of central importance in the correspondence. This is less easy to illustrate, since so many of the letters touch on it implicitly, whether in discussing quotations or examining individual aspects of editorial principle and practice. A few letters however tackle the matter directly, the most important of which is Henry Sweet’s communication to the Delegates of OUP written on 20 April 1877. This concisely articulates the unique features of the dictionary the Philological Society wanted the Press to take on under Murray’s editorship, correctly predicting that the new work would come to be seen as an authority throughout the English-speaking world.

Not all the letters fall into one of the above categories. One (letter 990816A) has been chosen to illustrate Murray’s love of walking in mountains and the importance of his regular summer holidays with his family, always accompanied by dictionary papers to work on. Another set of letters, in which Murray worries away at the etymology of beat, mentions many other things besides—flooding in the new Scriptorium after the move to Oxford in 1885, the stream of visits from distinguished Oxford personages, and one of his first evenings at the Oxford Philological Society (letters 851109A, 851118B, and 851122A). A complete catalogue of the selection can be found here.

The authors and recipients of the selected letters, listed here, have also been chosen to give a sense of the range of Murray’s correspondents—from major figures of the day such as former Prime Minister William Ewart Gladstone and the poets or novelists Alfred Lord Tennyson, George Eliot, Robert Bridges (Poet Laureate), and Thomas Hardy, through key members of the Philological Society or employees of OUP such as Henry Sweet, Walter William Skeat, Henry Hucks Gibbs, and Philip Lyttelton Gell, to scientists and men and (occasionally) women of letters such as Isaac Bayley Balfour, Frederick Thomas Elworthy, Lucy Toulmin Smith, and Constance Pott (advocate of Bacon’s authorship of Shakespeare’s works), and to pioneers of Victorian women’s education such as Elizabeth Wordsworth (founding Principal of Lady Margaret Hall) and Edith Hastings (first Headmistress of Wimbledon High School). Murray also wrote substantial letters—usually pedagogic in tone, sometimes patient, sometimes testy—in response to members of the public (many identified only as ‘Sir’ or ‘Madam’) who had contacted him to seek his advice or offer their praise or criticism of the dictionary.

The content of the Murray Scriptorium has been written and edited by Prof Charlotte Brewer (Hertford College, University of Oxford) and Dr Stephen Turton (Gonville and Caius College, University of Cambridge). The conversion of transcriptions into XML documents has been overseen by Turton and the online platform was built by Huber Digital. The pilot is funded by a British Academy/Leverhulme Small Research Grant awarded in 2021.